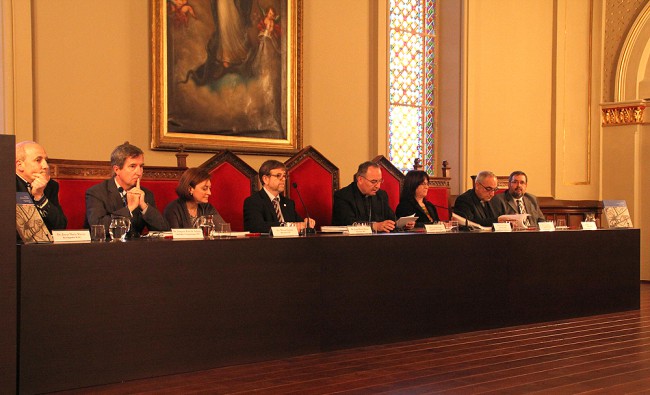 At the hall of acts of the Tarraconension Centre, ‘El Seminari’  on Thursday 4th April was held the presentation of the Book “Tarraco cristiana ciutas” charged by Dr Joaquin Ruiz de Arbulo, catedratic of the University Rovira i Virgili (URV) and investigator at the Catalan Institute of Classical Archaeology (ICAC) who defined the work as “book of books with twelve chapters of great importance and with  magnificent results.

The work collects the papers from the course “Historia y Arqueologia cristiana de Tarraco” organised by the Institute of Superior Religious Sciences, Saint Fructuosus (INSAF), the Biblical Museum and ICAC in 2010, which converts into an interdisciplinary reflexion which affronts the historical complexity of events leading to the end of the classical world preceeding the medieval period. Also detailed is the historiographical  evolution of Christian archaeology, including the latest ideas and expanding future objectives of investigation.

The act was presided over by Archbishop Mons. Jaume Pujol, and counted with the presence of the lieutenant of culture from the Town Hall at Tarragona, Carme Crespo, the vice-rector of the Political Academy and Investigation of the URV, Dr Jose Manuel Ricart Pla, the vice-director of the INSAF, Mn. Rafael Serra, the director of the Tarraconensian Centre `El Seminari¨, Marisa Jimenez, and the editors of the book Josep M. Macias and Andreu Muñoz.

One of the editors of the book Josep M. Macias, explained that with this work have been united three distinct fields  as are investigation, teaching and socialization. “A useful tool on the palaeo-christian world of Tarragona, which will shortly form a part of library interchange with three hundred centres, and in another year ICAC will make it free via internet”.

In closing the act the archbishop alerted that initiatives such as this continued to favour our society and our church.