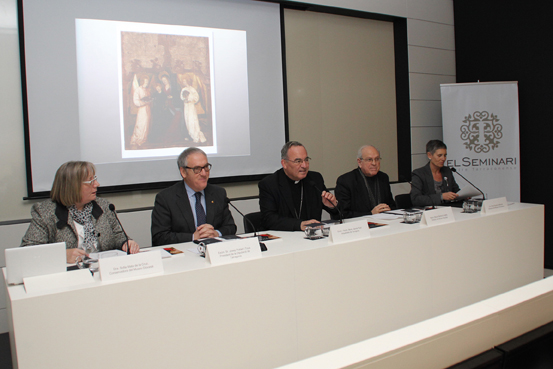 “A catalogue with 34 works of gothic paintings with rigorous content but at the same time divulgative”. In this manner defines the Director Sofia Mata, conservator of the Diocesan Museum of Tarragona (MDT), and author of the texts, the new book Diocesan Museum of Tarragona. Gothic Painting (Ed. Escua) presented on Wednesday 19th December in the Saint Tecla lecture room of the Tarraconensian Centre “El Seminario”.

The first speaker was Mons Barbara, who emphasized that the catalogue was a project materialized with works from the Cathedral of Tarragona and other places of worship in the diocese. He also announced that the MDT was preparing for its first centenary in 2014.

In her presentation Dr. Ricoma, following a trip through the various stages of the DiocesanMuseum from its origins, emphasized the great visual impact of the catalogue, which contains one of the most beautiful images of Saint Paul and Saint Tecla on the  cover. Thirty four works of a religious character, with texts in three languages which make accessible to the public the contents. Also should be mentioned the photographic work of the four participating photographers: Carlos Aymerich, Ramon Cornado, Joan Farre and Santiago Grimau.

The president of the Diputacion qualified the work as concise, meticulous and rigorous. “The collection is the principal protagonist but the book has great merit as it is within the reach of all”, he explained.

The Archbishop concluded the act, congratualing all those who had collaborated and made possible the publication of this catalogue. Mons. Jaume Pujol emphasized the great value of these paintings: “many persons will have prayed in front of them. They are a true cathecism”.