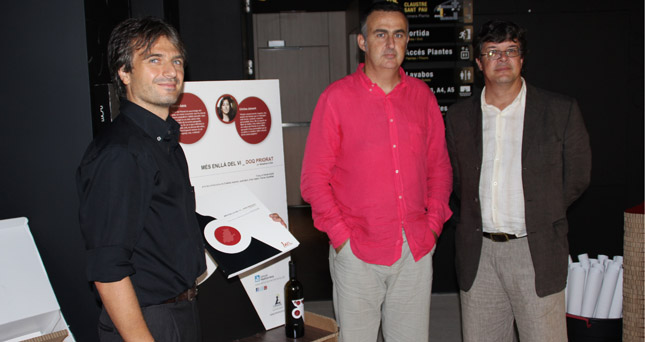 The director of the Scientific and Technological Park of Tourism and Festivals of Vila-seca and the Dean of the Faculty of Geography at the University Rovira and Virgili (URV)  presented before the means of communications on Tuesday 18th September, in the lecture hall Saint Magin of the Tarraconensian Cultural Centre the editorial project “Further on than wine”. The authors of the project Sebastiano Alba and Eduardo Soler valued the lights and the shadows of the only Qualified Denominations of Origin of Cataluña, DOQ Priorat.

Salvador Anton  valued the work of editorial divulgation which supposed “a new way of seeing the wine of the Priorat, and the better understanding of DOQ, the territory, the scenery and above all persons, their personal itineraries and specific voacation in relation to wine and the territory, persons who front the processes which accompany this leadership and who have firmness of the future in relation to wine and the territory.” In this same, sense the authors of the work, Sebastiano Alba and Eduardo Soler, underlined that the Priorat, as a region, has to commit itself towards quality, “not only in its wine, but also in its hospitality and all that which surrounds experience.”

For the future, Sebastiano Alba, opinioned “with the crisis the wine of the Priorat would be a more humanized wine, apart from having its feet on the ground, with regard to the level of prices as principally with its relations in its surroundings”. In judgement the crisis in the sector of wine, as in other ambits, “is a crisis of values, and in the Priorat it is superceeded by those capable of recognising the value of sacrifice.”

“More than a book – concluded Salvador Anton – it is a project which makes reference to a vision signified by the production of wine, the ethics of society, and of style and determined manner in doing things; it links directly with the four vectors of development identified in the 90s by the potential of the Priorat: nature, ambiental preservation, the brotherly sector of oil and the search for transcendental spiritualism.”