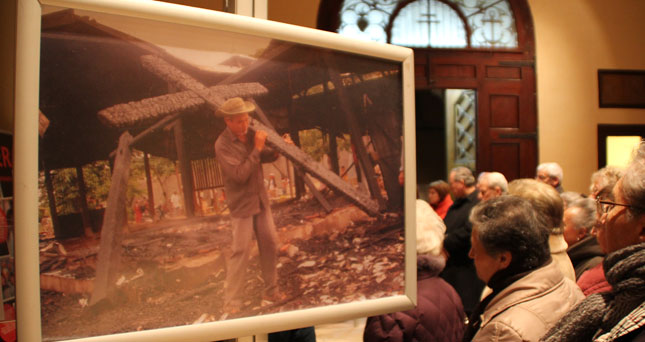 Through twenty five photographs realised by pontificial foundation Help to the Needy Church (AIN) we can put a face to those Christians who today are being persecuted for reasons of faith in countries as India, Egypt, Iraq, Nigeria or Yemen among many others. The exhibition pretends to let us know a reality much unknown of the lack of religious liberty today, especially towards Christians.

“It is estimated that in todays world there are three hundred million persecuted Christians”, explained Monica Garcia one of the collaborators of the foundation. In the act of inauguration presided by the Archbishop on the 15th January in the Tarraconensian Centre “The Seminary”.

The director of Help to the NeedyChurch in Spain, Javier Menendez, explained that fundamentals of religious persecution is in seeing other beliefs as a menace. “Seventy five percent of persons persecuted for their faith in the world are Christians. The attacks on symbols, places of worship and Christian pastors are continous in countries as China, North Korea, Vietnam and Iran, among others”. Menendez  mentioned radical Islamism and nationalism as the principal focus of violence. However  persecuted Christians  – he emphazised – “much valued prayer, they have a joy in faith and they are dedicated, they do not feel ashamed of their beliefs and are prepared to die, if required, for the faith.”

Help to the NeedyChurch is a pontificial foundation from 1947 founded by the Dutch monk Werenfried Van Straaten of the order of Saint Norbert. At the end of the second world war he saw the need to reconstruct not only cities but also the hearts of persons, a task continued today by the Foundation.

The exhibition which is sited for the first time in a Catalan city can be visited until the 31st of January in the vestibule of the Centre. All those groups, parishes and colleges who wish to have a guided visit need to arrange this via the electronic mail info@ctarraconense.cat.