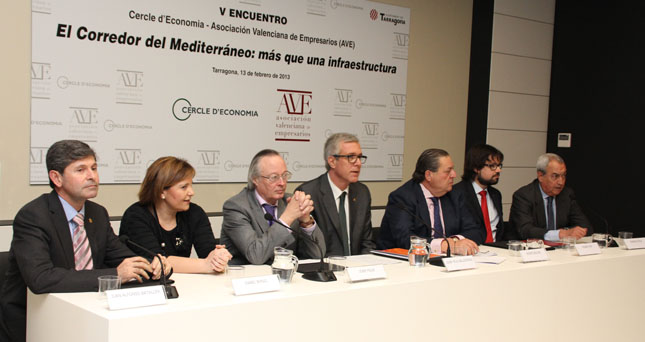 The Tarraconensian Centre (CT) entertained on Wednesday the 13th February the 5th employers encounter organised by the Circle for Economy and the Valencian Association of Employers (AVE) which was centred on giving impulse to the Mediterranean Corridor as a way of permitting traffic by rail towards Europe. The meeting presented a common front between Catalans and Valencians to attain this objective.

The act counted with the presence of the president of the Economic Circle, Josep Piqué; the mayor of Tarragona, Josep Felix Ballesteros; the president of the AVE, Vicente Boluda; the councillor for Infrastructures, Territory and the Ambient of the Generalitat of Valencia, Isabel Bonig; the secretary of Territory and Mobility of the Generalitat of Cataluña, Ricard Font and the mayor of Castellon, Alfonso Bataller among other personalities.

Following the opening and presentation of the act by the mayor of Tarragona, a round table was held regarding the traffic of goods and the future of the industry in Europe moderated by the Political economist of the UB, Anton Costas.

During the act, which presented the Mediterranean link as something more than an infrastructure, a manifesto entitled `Manifesto of Tarragona´ was approved. This document stated the need to convert the corridor of the Mediterranean into a link for rapid displacement of the great economic region which is the Mediterranean and which would generate activities and connect territories, ports and roads. In this form through the co-operation between territories, would be situated in a privileged manner the façade of the Spanish Mediterranean on the global map, connecting it into a crucial key in the Orient- Occident and North- South-