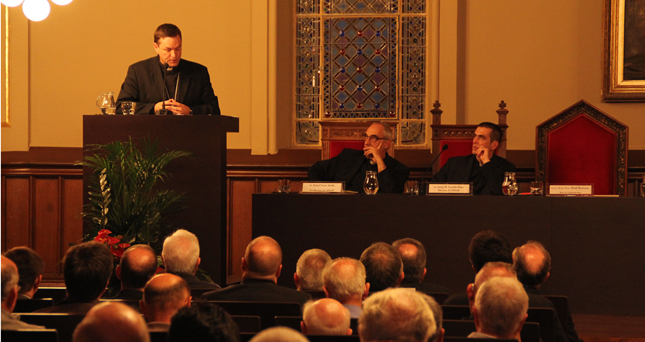 The Saint Fructuosus Institute of religious Science (INSAF) inaugurated on Wednesday 17th October, the course 2012 – 2013, an act which counted with the presence of the bishop of Ciudad Rodrigo (Salamanca), Mons. Raul Berzosa who presented the inaugural lecture.

The act of inauguration began with the celebration of the eucharist in the chapel of the Seminary, presided over by the Archbishop, Mons. Jaume Pujol, and jointly celebrated by Mons. Raul Berzosa and presbyters, professors of INSAF. In continuation in the hall of acts of the Tarraconensian Centre, “The Seminary” took place the academic act, presided over by the Archbishop in the presence of Mons. Raul Berzosa, the president-dean of the faculty of Theology of Cataluña, Mn.Armand Puig, the director of INSAF, Dr.Josep Maria Gavalda, the vice-rector of Postgraduate and Permanent Formation of the University Rovira i Virgili, Dr Aurora Ruiz, the rector of the Interdiocesan Major Seminary and diocesan delegate for education, Mn. Norbert Miracle, the vice-director of INSAF, Mn.Rafael Serra, the vicar general of the archdiocese , Mn. Joaquim Fortuny, the sub delegate of the Government of Tarragona. Jordi Sierra, the territorial director of Government and Institutional Relations of the Government of the Generealitat  of Tarragona, Rosana Campos, the dean of the faculty of Sciences of Education and Physiology of the University Rovira i Virgili, Dr Jordi Tous, the councillor for public spaces of the local authority of Tarragona, Antonio Rodriguez and the director of the Institute of Classical Archaeology in Tarragona (ICAC), Dr Isabel Roda.

Following the memorial lecture given by Mn. Josep M Gavalda on the 2011 – 2012 course, the bishop of Ciudad Rodrigo gave the inaugural  lecture entitled “God is not dumb, nor dangerous nor a spectre, he continues to speak in the new form”. Mons. Berzosa  doctor in theology and author of numerous publications exposed the thesis on contemporary and atheism citing authors as Harris, Dawkins and Hitchens, among others, and their works which defended  the so called  “scientific naturalism” by which only science could proportion a recognition  of reality. In this sense God and faith are an invention. Mons. Raul Berzoza during the inaugural lecture  also elaborated a positive criticism at all atheists proposing a serious dialogue with theologists and biblical experts.

“The works of the new atheists” – he said – “are works impregnated with passion against beliefs which when judged have no proof. The new atheists are obsessed in finding an explanation as to why people continue to believe in god if he does not exist and theology is useless. They are convinced that people believe because of weakness” stated the bishop of Ciudad Rodrigo. Mons. Berzosa adding that faith in God as has been shown by Christian tradition implies a total encounter, giving and conversion of the form of life. “It is an experience of life which makes possible the art of living”, he concluded.

Mn. Armand Puig, Dean – president of the Faculty of Theology of Cataluña in his presentation remarked on the great vitality of the INSAF, “an institute which walks with firm pace and which has taken in extroadinary activities such as the International Congress on Saint Tecla and which in June  2013 will address another congress regarding the last years in the life of Saint Paul”, and finally the  Archbishop inaugurated the new course 2012 – 2013.