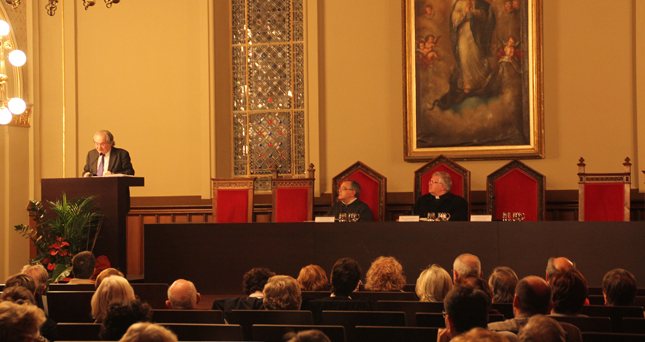 The director of the National Archive of Catalunya, Dr Josep Maria Sans Trave gave a conference in the Hall of Acts of the Tarraconensian Centre, The Seminary on the history of the order of the Templars, their persecution and final sentence, of 700 years ago, which declared the innocence of the Catalan Templars. This conference was the first act re-transmited in direct by the television channel via the internet of the Archbishopric.

The act was presided over by the vicar general of the archdiocese Mn. Joaquim Fortuny, and was initiated by the presentation of the speaker by Mn. Manuel M  Fuentes, director of the Historic Archives of the Archdiocese of the Archbishopric of Tarragona. A son of Solivella, Dr Sans Trave was formed in the universities of Barcelona and Bolonia, he is a member of the Royal Academy of Letters at Barcelona and the Royal Academy of Doctors, he is also an author of various books.

“On the 4th November 1312, the barcelonian canon Arnau Cescomes- who later was archbishop of Tarragona (1334-1346) read in the chapel of Corpus Christi in the cloister of the cathedral, the sentence exonerating the Catalan Templars of all accusations and charges with which they had been charged. With this institutional act we are united to the diverse acts which are being realised in all European countries in the memory of the Templars”, Dr. Sans Trave stated at the start of his exposition.

The order of the Templars was born in the Medieval era following the first crusade in the 11th century to assist pilgrims in their journey from the coastal ports of Palestine to the interior of the country, were could be found the sacred sites related to Jesus Christ. Seeking the approval of the universal church it was in the year 1129 that the Pope convened the council of Troyes. This recognition would be placed in jeopardy 183 years later in 1312 when they would be accused with acts against the faith, dogma, morality and good manners.

In this process of persecution the director of the National Archives of Cataluña emphasised the difference with other European countries such as France where they were interrogated by torture, the Catalan church was characterised by its benevolent treatment when dealing with Templar activities. It was then that the Pope in order to avoid the French forms of treatment attempted to regain control by issuing the `bulla pastoralis´ in 1307, by which he ordered the detention of all Templars in Christendom, notifying this to all princes, in order that interrogation be carried out by commissions created in each ecclesiastical province.

“To deal with Templar topics” – he explained –  “in Tarragona were held four councils: that of 1308, another in September of 1310, a third in February/March of 1311 and the last at the end of October beginning of November of 1312. In all these the result was in favour of the detained friars.

In Cataluña the order of the Temple was present for 176 years, during which period of time it gave great service to Catalan institutions.

The Saint Fructuosus Institute of religious Science (INSAF) inaugurated on Wednesday 17th October, the course 2012 – 2013, an act which counted with the presence of the bishop of Ciudad Rodrigo (Salamanca), Mons. Raul Berzosa who presented the inaugural lecture.

The act of inauguration began with the celebration of the eucharist in the chapel of the Seminary, presided over by the Archbishop, Mons. Jaume Pujol, and jointly celebrated by Mons. Raul Berzosa and presbyters, professors of INSAF. In continuation in the hall of acts of the Tarraconensian Centre, “The Seminary” took place the academic act, presided over by the Archbishop in the presence of Mons. Raul Berzosa, the president-dean of the faculty of Theology of Cataluña, Mn.Armand Puig, the director of INSAF, Dr.Josep Maria Gavalda, the vice-rector of Postgraduate and Permanent Formation of the University Rovira i Virgili, Dr Aurora Ruiz, the rector of the Interdiocesan Major Seminary and diocesan delegate for education, Mn. Norbert Miracle, the vice-director of INSAF, Mn.Rafael Serra, the vicar general of the archdiocese , Mn. Joaquim Fortuny, the sub delegate of the Government of Tarragona. Jordi Sierra, the territorial director of Government and Institutional Relations of the Government of the Generealitat  of Tarragona, Rosana Campos, the dean of the faculty of Sciences of Education and Physiology of the University Rovira i Virgili, Dr Jordi Tous, the councillor for public spaces of the local authority of Tarragona, Antonio Rodriguez and the director of the Institute of Classical Archaeology in Tarragona (ICAC), Dr Isabel Roda.

Following the memorial lecture given by Mn. Josep M Gavalda on the 2011 – 2012 course, the bishop of Ciudad Rodrigo gave the inaugural  lecture entitled “God is not dumb, nor dangerous nor a spectre, he continues to speak in the new form”. Mons. Berzosa  doctor in theology and author of numerous publications exposed the thesis on contemporary and atheism citing authors as Harris, Dawkins and Hitchens, among others, and their works which defended  the so called  “scientific naturalism” by which only science could proportion a recognition  of reality. In this sense God and faith are an invention. Mons. Raul Berzoza during the inaugural lecture  also elaborated a positive criticism at all atheists proposing a serious dialogue with theologists and biblical experts.

“The works of the new atheists” – he said – “are works impregnated with passion against beliefs which when judged have no proof. The new atheists are obsessed in finding an explanation as to why people continue to believe in god if he does not exist and theology is useless. They are convinced that people believe because of weakness” stated the bishop of Ciudad Rodrigo. Mons. Berzosa adding that faith in God as has been shown by Christian tradition implies a total encounter, giving and conversion of the form of life. “It is an experience of life which makes possible the art of living”, he concluded.

Mn. Armand Puig, Dean – president of the Faculty of Theology of Cataluña in his presentation remarked on the great vitality of the INSAF, “an institute which walks with firm pace and which has taken in extroadinary activities such as the International Congress on Saint Tecla and which in June  2013 will address another congress regarding the last years in the life of Saint Paul”, and finally the  Archbishop inaugurated the new course 2012 – 2013. 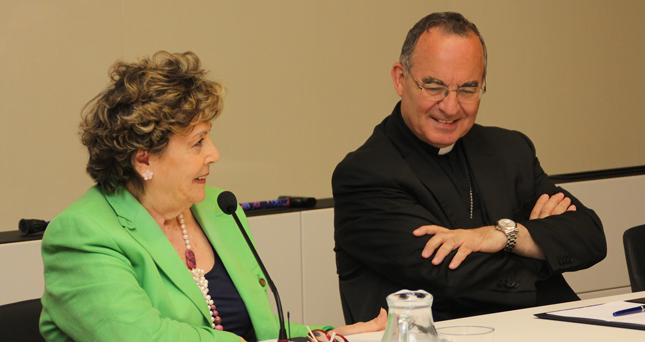 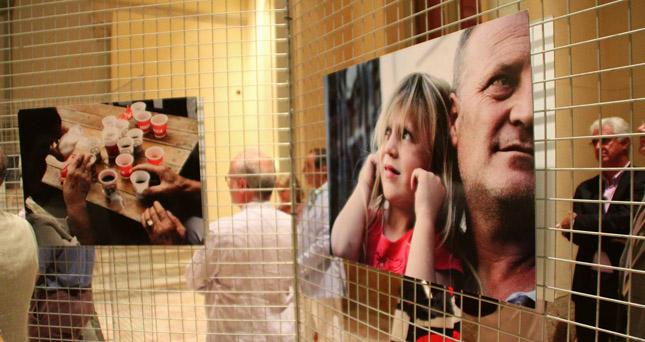 The vestibule of the Tarraconensian Centre has since Friday 14th September the day of inauguration, until the 28th of the same month exhibited in a photographic manner “The Hands of Saint Tecla”, the artist Tania Marcadella (Vienna), commissioned by the photographer Pep Escoda.  The exhibition was inaugurated by the Archbishop, and samples a photographic work directed at the hands of people during the festival of Saint Tecla in the city of Tarragona as a symbol – according to the author of the work ,and of a common energy. Marcadella explains that with this selection of images she wished to “retain through a reduced language of images their sentiments, enthusiasm, irridecence and force. Through the hands are transmitted a good local culture, symbolic and real”, she emphasizes.